Earlier this month Ella Woodward and Sir Charles Dunstone spoke at the Leeds event for Entrepreneurs Exchange. The event sponsored by UKTI’s Exporting is Great and HSBC bank saw many events across UK cities held concurrently.

Ella Woodward is the heir of one of the daughters of the Sainsbury’s family. Her father is the former MP and cabinet member Shaun Woodward. Ella attended St Andrews University in Scotland but following graduation fell seriously ill gaining significant weight. Bed bound Ella started to develop gluten free healthy eating recipes and publishing to a blog. Ella now has 25,000 followers on Twitter and 6 members of staff. Deliciously Ella not only publishes the online healthy eating food blog but also some best selling books. Not bad for a 23 year old entrepreneur. Her advice is to be yourself, be enthusiastic and creative.

Following on from Ella was Sir Charles Dunstone. The billionaire mobile telecoms tycoon is not just the founder of the Car Phone Warehouse but also TalkTalk the telephony, TV and broadband provider. Sir Charles stated to be an entrepreneur you have to be a little thick. He went on to state he had just employed an executive who was Oxford educated completing a degree in Politics, Economics and Philosophy. This particular chap is so intelligent he often analyses data and makes one decision only to reverse the decision by analysing another set of data.

Sir Charles explained how his approach was to have a clear vision of where you are heading and stick to the course. You will get obstacles and barriers in the way but all you need to do is to find ways to go over them or round them. That’s why it pays to be a little thick as a entrepreneur otherwise you would never get started. Not bad from a person who is one of the world’s top 1000 richest people and a member of the Chipping Norton set.

Finally, Sir Charles talked about the importance of looking at your product and service from the customer’s point of view. Talk to your customers and listen to what they have to say so you can incrementally improve your business. Always look to simplify your business because as you grow things become more complicated. Without your customers you don’t have a business! 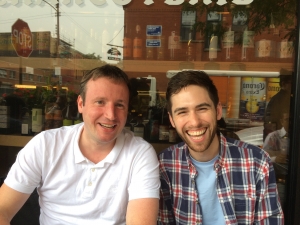 The old meatpacking district is really taking off in Chicago’s West Loop. With the Google’s Mid-West HQ only 5 minutes away, we met our neighbours Basecamp at our new office for lunch. Basecamp is one of the world’s favorite project management software companies and Jason Fried one of the co-founders has written a number of successful business books such as Rework and Remote both of which have been best sellers with the New York Times and the Wall Street Journal. Jason Fried’s mum was looking to buy an iMac from the local Apple store and the customer experience was so exceptional she recommended that Jason, the co-founder of Basecamp, hire Michael Berger.

Michael had just got back from re-locating his 96-year-old grandmother from Florida and was able to meet myself and my brother for lunch before we jumped on a plane back to the UK. Over lunch we discussed a whole range of issues, including how Basecamp are rewriting their project management software from scratch. Basecamp are definitely getting their name out there – sponsoring music festivals and advising Coursera on some project management courses.

Michael was particularly interested in how Webanywhere gains feedback from its customers. Michael’s role at Basecamp involves QA, and part of the unique work culture at Basecamp means he often works from home in a morning, goes to the gym and then heads to the office. Jason, who leads design, and Daniel who leads engineers, are equals and opposites. Whilst Jason is a permanent residence in Chicagoland and is a well know business-face, Daniel spends time in California and Southern Spain while pursuing his interest in racing cars. 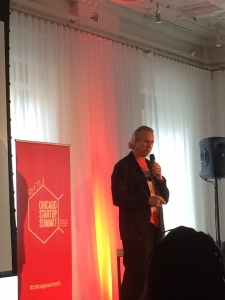 Basecamp’s open APIs means it can be integrated with learning management systems such as Moodle. One of the challenges Basecamp has is the education of the user. Users in positions of authority can ensure the whole organisation is using the product, whilst more junior members of staff may struggle to get further buy-in. Basecamp helps SMEs in particular get stuff done by providing best-in-class project management software. In addition, Amazon’s Jeff Bezos is a mentor to Basecamp, who have millions of paying customers and perhaps go against the grain of most software. Basecamp believes in “less as more”. Perhaps this is why they changed their company name from 37signals to Basecamp a number of years ago. Furthermore they trimmed down their product line from several products (such as Campfire, Backpack and Highrise) to just Basecamp.

The “billionaire rule” in business is focus and Basecamp have bet the farm house on their product. They believe you don’t need to spend money on marketing, you just need a great product. Basecamp certainly has a great product, with interested followers and participants such as Bezos.

Earlier in the week I visited the newly-installed Virgin Hotel in downtown Chicago. The Chicago Startup Summit, held in conjunction with Virgin Unite (The Branson Family’s foundation charity), was held to educate and impact local startups. Seminars were held by One Trick Pony, a design agency based in Philadelphia and Detroit Soup, a crowdsourcing charity featured in a recent BBC documentary. Other people presenting included a number of “Pitch to Rich” finalists who had been flown in from London. Andrew Hunt finished the day talking about how he planned to import a little-known fruit known as the baobab from the African continent, which would ride the current trend of super food consumption whilst providing a profitable harvest for African farmers. Andrew had been in a state of depression as a young marketing executive in London, only to find himself inspired after 4 years living in Africa. Andrew spotted an opportunity of driving demand for the African superfood using his skills and expertise. Richard Branson awarded Andrew’s company £100,000, allowing him to move out of his kitchen and employ 15 staff. 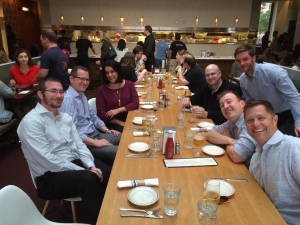 What was particularly good about the week in Chicago was seeing other British entrepreneurial startups alongside Webanywhere. Chicago is too often skipped for the more glamorous destinations of New York and San Francisco, but is now becoming a real contender for startups, with the highest proportion of female-led startups in the USA. We on-boarded 3 new members of staff at our Fulton Market office and met a few of our key customers. All in all, another good week in America and my 2nd week in one month – which is a personal record!

It was back in 2010 when Professor Jeff Gold explained to me the importance of values. During a similar time I had watched a Harvard Business Review Ideacast on the importance of having a company purpose. Once I understood these theories, setting the company values and our cause was straightforward. Our purpose was to create jobs and I measure my success by this. Our company values are to be flexible, fun, contribute, go the extra mile and to keep learning. Furthermore we want superstars who are curious, proactive and helpful.

We have 8 core values at Webanywhere but one of the values if mastered can make living the other values much easier. You can often tell how curious a person is by the number and quality of the questions they ask. The best paid consultants in the world are paid the big dollars for the quality of the questions they ask. A curious person having a taxi ride will be so curious they will know where the taxi driver was born, his interests, his family, his challenges, his upbringing and probably his life history.

I was taught from a young age that it was rude to ask too many questions. Certainly asking 20 questions would be too much! However, my thinking has changed as I have matured. I learnt from UK Entrepreneur James Caan that anything you want to know is in somebody else’s head. Therefore all you need to do is ask the right questions.

In an interview situation a curious candidate will have done their homework on the company in question and will have many questions to ask. A curious co-worker will always ask questions  to further understand the truth. When troubleshooters enter businesses to turn them around they often use the “5 Whys” technique to get to the root cause. Remember, in business the key is to find the business problem, so seeking the opinions of workers is important, especially those closest to the coal face.

All in all, curious people have more active minds, they are open to a world of opportunities and have ideas. Curiosity limits waste, drives sales, helps innovation and creativity. Of course, curiosity by itself is no use, and adds no value. You need to combine your curiosity with the energy of proactivity and helpfulness, which makes every member of staff and every customer feel like they are walking on the red carpet.

If you are reading this blog and have watched our video, you too have a curious mind! To be curious implies you are eager to learn and to change.