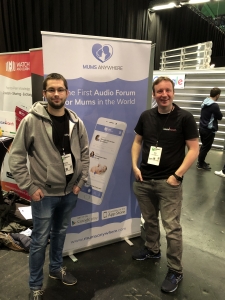 To round off the year I traveled to Berlin for my first Tech Crunch Disrupt. Whilst two of us in the Ventures Anywhere team flew from Manchester two other colleagues drove 6 hours North from Katowice to Berlin.

I’ve been an avid reader of Tech Crunch over the years so to go to my first Disrupt event and learn what the rest of the startup industry was up to was always going to be insightful. From panels in the main stage to off the record workshops ranging from Blockchain to Artificial Intelligence seminars – Venture Capitalists, journalists and entrepreneurs descended on Berlin.

It was my first visit to Berlin in 10 years and the Arena Berlin in the Eastern part of the city hosted the event. The venue a former industrial factory also proved to be an appropriate setting for the unveiling of brand new bus for social movement provided by MOIA VW’s self driving vehicle and car sharing arm.

Other UK startups attended Disrupt with TechNorth one of the lead sponsors. It was good to catch up with Kane Fulton a journalist working for TechNorth who’s fear of flying lead him to travel all the way to Berlin on the train. UK startups Big Change, Synap and Tutora showcased their offerings. Big Change is a remote workforce app, Synap a quiz engine for student revision and Tutora a marketplace for tutors. 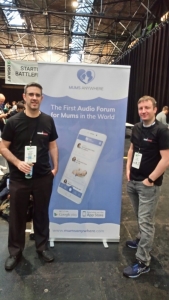 As Ventures Anywhere we were showcasing a series of innovations including Sound Branch a voice messenger, Watch and Learn a video sharing platform and Mums Anywhere the world’s first audio forum for mums which has been rising in the social networking ranks on the Apple App Store.

Mums Anywhere has a number of endorsements from the likes of celebrities Ferne McCann who presents on This Morning, Amy Childs formally of The Only Way is Essex and Cara de la Hoyde of Love Island who has just given birth. Mums Anywhere has recently been in the National Press including The Daily Mail and The Yorkshire Post. It was my wife Claire’s idea. With our first baby Joseph Claire suffered from gestational diabetes and would often worry about our baby endlessly searching forums and conducting Google searches. The problem was there were no emotional platforms for this very emotional issue. 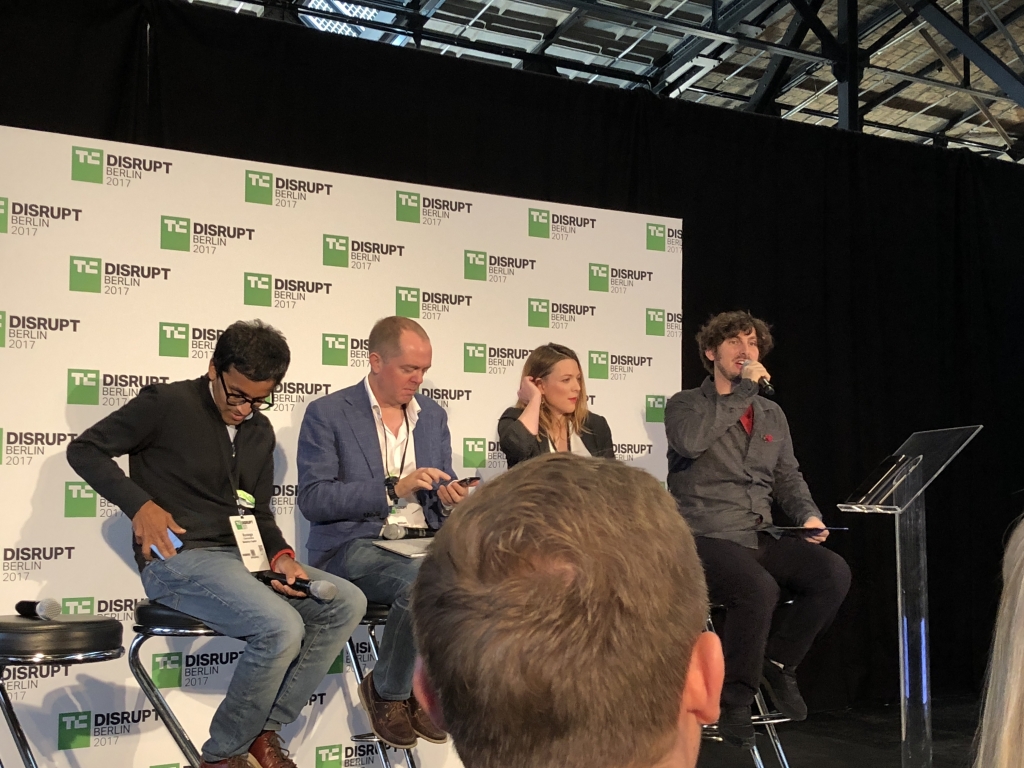 Mums Anywhere combines the empathy of the human voice with the wisdom of the crowd to give mums piece of mind. This can help reassure mothers and mothers to be with the comfort of advice from more experienced mums and other mums in a similar situation. When a mum is up in the middle of the night and there is no one to talk to listening to other mums and their pearls of wisdom can be very reassuring.

There are 2 billion mums in the world and we think Mums Anywhere can reach 200M users in the next few years. We will have to wait and see what happens, voice notes are on trend and mums have been joining from the UK, the Americas, Spain, Germany, Turkey and as far a field as Australia and Malaysia. 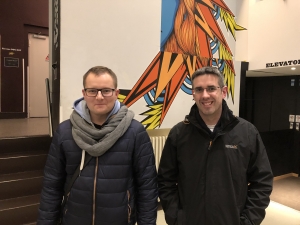 Josh Constine Editor-At-Large hosted an off the record panel on Artificial Intelligence. Guests on the panel included Suranga Chandratillake of Balderton Capital, William Tunstall-Pedoe of Creative Destruction Lab, Marie Outtier of Auden.ai and Darja Gutnick of Bunch.ai. Josh started by posing questions around the ethics of AI and bias created by computer programmers. For example what if an AI application for hiring through biased just hired white males? This clearly would not be acceptable in terms of employment diversity. The ethics moved on to a conversation around universal credit and AI’s impact on jobs. Suranga suggested that humans would have more free time and there would be more people playing games together. William mentioned the fact that AI can enhance the effectiveness and efficiency of jobs for example radiographer in hospitals and surgeons would people able to spot problems faster. I’ve got to admit having just been through passport control in Manchester digital scanning was much quicker than the traditional approach deployed in Berlin which resulted in massive queues. Being a passport control officer whilst being a very important task must be mind numbing. This is certainly one instance where AI wins. I am however worried about the net effect on jobs. What will happen to all the taxi drivers who loose their jobs to self driving cars and to the para legal profession which will be made redundant due to machine learning?

Suranga Chandratillake who advises the UK Prime Minister on technology matters explained what Venture Captitalists should look for when investing in AI firms. Suranga said “Not only does the computer scientist need to have a good understanding of artificial intelligence but they need specialist knowledge of the problem area they are tackling.” He went on to explain the VCs need to believe that the team they invest in can solve the problem. 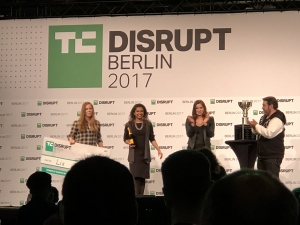 In the Startup Battlefield competition the winner Lia launches degradable pregnancy test made out of paper not plastic and so being much more friendly to the environment. The runners up were Blik claimed they could reduce the need for barcodes in warehouses worldwide by up to 30%. Both ideas provided innovative ways of solving massive problems.

Bringing matters to a close the founder Robert Vis of MessageBird was interviewed by Editor-in-Chief Mike Butcher. Robert bootstrapped his business for 6 years before taking a series A round of invest of $60M this year. This $60M was the highest series A on record in Europe. MessageBird provide the SMS and virtual numbers for companies such as Uber and manage the infrastructure layer for mission critical messaging be it SMS, voice or text. 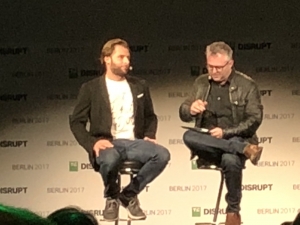 One of the questions Mike Butcher asked Robert Vis was “How come this is your first Tech Crunch Disrupt?” to which Robert Vis replied “I’ve been too busy building my companies.” In fact Robert had just taken a 3 week break in Thailand to learn kickboxing and only took a primitive phone to avoid disturbances for his first holiday in 6 years. A much deserved break I’d say!

I guess that statement shares resonance with me as I too have been too busy building Webanywhere over 14 years to make it to Tech Crunch Disrupt and have instead relied on watching YouTube videos of Disrupt. Having started my Ventures arm Ventures Anywhere Tech Crunch and such conferences are making their way into my diary. Perhaps San Francisco will be next?

A link to Mums Anywhere can be found below: