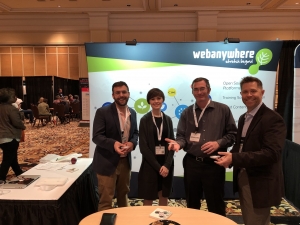 This week I attended DevLearn 2017 in Las Vegas. The last time I had visited DevLearn was 10 years ago so it was good to meet up with our USA team and see how the conference had evolved. The theme for the week was “The Future of Learning”.

Two speakers at the conference caught my eye. Julian Stodd of Sea Salt Learning and Jane McGonigal a Futurist from with a PHD from UC Berkley. Julian gave a talk on ‘Social Learning’ whilst Jane would give a speech on ‘How to Think Like a Futurist‘.

Julian who is from the UK was easily identifiable with his long beard and long hair. He talked about how he’d taken Nokia executives over a 14 week social learning journey.
One of the key points that Julian made is that you have to earn the right for peoples engagement in your social learning platforms. If you don’t and the right people take their engagement elsewhere because there are other things for them to be doing.
Below is an image describing 10 aspects of social learning.

The final keynote Speech in the main hall was by Jane McGonigal a futurist, game designer and best selling author.

Jane talked about how to imagine yourself in 10 years time. There are two ways of doing this.

Apparently it is much more affective to view your future in the first person.

Furthermore the more details you can put down on paper about 10 years into the future more creative you are.

Jane continued her tour by describing the possibility that companies might not have employees in the future but instead learners. 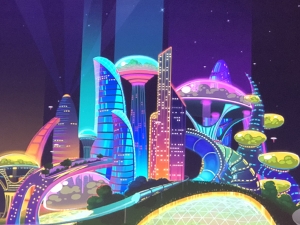 Jane stated that the more absurd an idea is the more likely it might become a reality in the future.

One thing is for certain whether it is today or tomorrow the more we learn and educate ourselves the greater our competitive advantage will be in a new learning era.