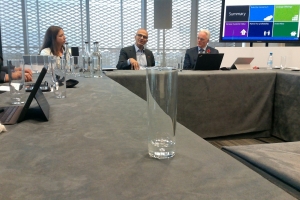 Visiting London Excel recently, I was lucky enough to meet the Global CEO of Microsoft Satya Nadella at a business round table discussion. Much of the discussion centered around the cloud and how Microsoft want to be great at productivity software.

Three main product and services lines underpin Microsoft’s ambitions to be one of the mega vendors in the cloud computing space. Office 365, Azure and Dynamics are Microsoft’s big bets on the future where consumers can access their software and apps on multiple devices in anyplace and anywhere.

Satya believes the truth of the product and customer realities are important in the digital age. Microsoft allows some customers who are uncomfortable in moving entirely to the cloud a hybrid cloud alternative. However, with £5 billion spent on Microsoft Azure infrastructure and data centers in Dublin and The Netherlands, Microsoft is encouraging us all to move to the cloud.

Recent partnerships with Dropbox, Salesforce and others demonstrates that Microsoft accept customers will dual source their software. Microsoft Word, Excel and PowerPoint are now available on iOS devices such as iPhones and iPads for free. So it’s no real surprise to see Word’s rise to number 1 in app download charts.

This new ‘horizontalisation’ of software represents a big sea change from the past when vendors, developers and resellers were either in the Microsoft camp or outside that in the Open Source, Linux, Google or Apple camp. 20% of services now delivered on Azure and the Microsoft cloud are Linux, which demonstrates that Microsoft does indeed love Linux. What Microsoft wants is 1st class product excellence – irrespective of the software stack in use.

Satya Nadella went on to explain how a mobile first, cloud first approach means people’s devices will come and go but all their data will be available anywhere and anytime on cloud. The world is becoming more digital and people want more responsive software. Whilst the cloud is becoming generally more accepted, Microsoft demonstrated how management policies can be set up to avoid people sending sensitive information outside of the organisation alongside mobile device security management.

I asked Satya how Microsoft would influence the future of education. The reality of the cloud and management console will allow teachers to act as IT technicians in schools. A new version of PowerPoint is to be launched and will allow teachers to bring PowerPoint to life in the classroom, with the ability to create quizzes and much more. For network managers using Active Directory, this can be taken to the cloud with just 5 clicks, making migrating to the cloud less daunting. Schools still need to be educated in the benefits of cloud computing, but over time this transformation will take place allowing teachers to teach and worry less about whether the technology works. IT will become similar to turning your gas or electricity on and off.

Webanywhere are already in the cloud. We intend to continue to offer our customers Office 365 integration with School Jotter. Like Microsoft, we understand it is important to ensure our software plays with others. Collaboration is more important than competition. We should move our software to the cloud and not have our heads in the cloud! 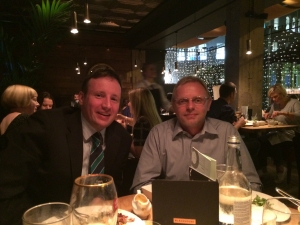 Sean and Michal of Webanywhere

Eric Schmidt and Jonathan Rosenberg have recently published a book called “How Google Works”. In it, the former CEO of Google and now Chairman Eric and his product guru Jonathan describe what has made Google successful.

One of their ideas is to organise the business around the people with the biggest impact. The 2 pizza rule from Jeff Bezos is recommended when getting started with projects. A small team that can be fed by 2 pizzas can be highly effective. The 7 rule explains how each manager in a business should have at least 7 direct line reports, as this keeps the organisation flat and avoids micromanagement. Eric and Jonathan actually recommend that organisational reorganisation should be done in a day and the remaining issues left to the smart creatives in the business to sort out.

So what is and who are these smart creatives? Firstly, they are learning animals with lots of curiosity. Of course being smart creatives they are obviously smart people. They want to make the world a better place and are always thinking of a better way of doing things. Smart creatives have a growth mindset and can live with ambiguity.

If smart creatives are what’s needed how do you get them? Google take the whole hiring process very seriously – so much so that every candidate’s data sheet was vetted by Larry Page until recently. Hiring is not just the job of management – it’s the job of everyone in the business. Google only hires great candidates. Great candidates are smart, ethical people who will challenge the organisation. These smart creatives want to make the product much better and get stuff done. They are passionate and believe in collaboration over competition.

Google believes in relationships, not hierarchies, and a culture of ‘Yes’. We all need to hire smart creatives who have an upward career trajectory. We must expand the field of potential candidates and not just recruit for now, but for the future. If we are to become smart creatives ourselves we must become learning animals.