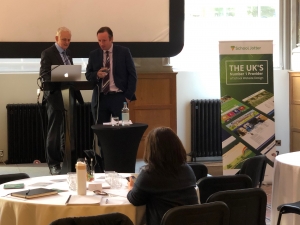 We have just hosted a fantastic event at Aspire in Leeds with Professor Stephen Peters the bestselling author of “The Chimp Paradox” book.

The brain has three main component parts. The chimp, the computer and the human. In real life it takes five human beings to pin down a chimp. Similarly, the chimp part of the brain is hard to control. Clearly, children with underdeveloped brains find it harder to control the chimp but this can be learned over time.

If emotional intelligence and calm centred leadership are important for success then it’s easy to understand why Professor Steven Peters has helped a number of famous sports celebrities and international sports teams. 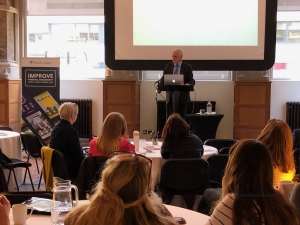 Professor Steven is himself a humble man that served as the Dean at the School Of Medicine at Sheffield University for 30 years. His moving into working with sports teams was by accident when he was approached by a cyclist who had a friend with mental health issues.

Professor Peters isn’t actually interested in sport and doesn’t watch TV. But he is interested in people and this has been his lifelong vocation.

Profoundly during Professor Steven Peters talk about why mental health is more important than academic achievement he made a salient point. When you are on your deathbed and you’re talking to people they never mention what they have achieved they only ever mention memories of loved ones and have sometimes regrets of why they haven’t been happier or had more fun. 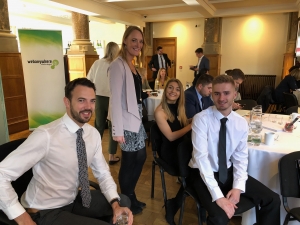 All human beings are unique and we are born with genes. These genes determine whether we have a calm nature or let’s say we are a little bit hot-headed. This was exemplified by the playing of the video showing two dogs eating ice cream from the cone. Initially, you feel sorry for one of the dogs because they seem to be left out. After one dog licks the ice cream gently and the other dog is left out all of a sudden the cone is gone and no more ice cream is left. One of the dogs quite simply could not control their chimp!

Mental health, especially with young people, has far reaching consequences. The root causes of mental health are complex but topics such as exam stress, social media and financial hardship at home can impact the lives of young people.

The important time for brain development is through the years 0 to 5. During a child’s early development, parents need to show love and stability. The brain actually doesn’t stop fully developing until the age of 32 which probably explains some of the irrational decisions made by teenagers and young people in their 20s. 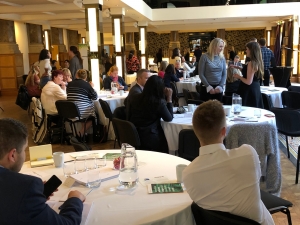 By understanding the mind and how it works, both teachers and children can be better supported. A good example of how you can control your chimp is when you’re at the traffic lights in your car and the light is on amber. Do you amber gamble? When you drive ahead your chimp is winning the battle and this can have far reaching consequences.

Professor Steven Peters was faced with a patient who has done just that. His patient had driven through the traffic lights only to kill a young person. Steven goes on to make the point that we are risking far too much by not controlling our brain.

Again, when adults are dieting the human part of the brain is agreeing to the good reasons why we should do it, quite often the chimp will win out by forcing us into a restaurant to eat a burger. It’s mind over matter. We need to remove the emotions and commit the time to what we want to achieve.

A good tactic for ensuring that we beat the chimp, for example, is to agree to do a sporting activity with a friend. If we don’t like letting our friends down then we will turn up for that run and beat the chimp.

Following the worldwide success of “The Chimp Paradox”, further books have been released by Professor Steve Peters. These books include “The Silent Guides” and “My Hidden Chimp”. My Hidden Chimp is particularly aimed at children.

You can learn more about Professor Steven Peters work here:

You can also listen to this short podcast

Why Mental Health is more important than Academic Achievement 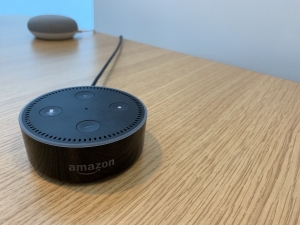 We all have websites and within those websites alongside educating customers, informing them of new products and services, explaining our company ethos and other matters there are web forms.

These web forms are full of utility and often drive a transaction or business process. Quite often the success of your website is to get people to fill in a particular form. UX and UI designers think about the different personas visiting your website and provide different user journeys to fulfil website goals. Indeed, Google analytics allows you to set up goals for the submittal of a form. Following this, based on your average order values and conversion rates you can tell what a goal is worth.

If the output your driving is for a user a customer to fill in a form either to enquire for customer support, get a quote or perhaps even to purchase order the less friction you can create on the journey the better.

In instances where using the voice is quicker, simpler and easier than using a traditional website or mobile interface then a voice first approach should be considered. Conversational interfaces for interacting with technology are not to substitute existing legacy systems but to complement them.

With the rise of smart speakers, voice assistance enabled on mobile phones and people’s behaviours moving towards sending voice notes over text messages there are big opportunities for you and your customers interacting via Alexa and Google assistant. If you haven’t already tried it and you’re an iPhone user setting up a calendar appointment or reminder using Siri is far quicker than manually touching your screen on your mobile phone to make this happen. This is because we can talk 4 times faster than we can type.

A use case of this in action is Virgin Trains. To book a train ticket on the traditional website took an average user seven minutes. When Virgin Trains launch the Alexa skill for customers train ticket booking times reduced to 2 minutes. Clearly, for the customer journey this is for faster quicker and simpler. Furthermore once Virgin Trains let the history of what the customer wanted for example the typical commute the user could simply asked for the last train ticket which would speed up the purchasing cycle yet again.

Recently, we launched a home valuation Alexa skill for Hunters. Whilst want we did may seem rather innovative and was a UK first in essence we ran a number of workshops with our customer to establish which Alexa skill would offer the greatest ROI and solve the biggest problem.

The consensus was to convert the popular web form for home valuation on the Hunters.com website to an Alexa Skill. Since launching the Skill the Hunters franchise network have given positive feedback and new sources of leads are generated for agents.

Your website will have web forms embedded within it. These will range from customer service and support, to general enquires and product reviews. You can take your existing proven web form interfaces to the smart speaker and voice assistants ecosystem.

Finally, because we live in the now economy and everyone is wanting to save time, money and increase convience voice interfaces will win out on the long term. Voice only interfaces might be low for e-commerce transactions but the addition of screens for multimodal experiences is changing this. Soon people will be browsing the web on their Smart TV with their voice and making purchases. Google Home Hubs and Amazon Echo Shows have screens allowing you to see and hear responses when interacting with smartspeakers.