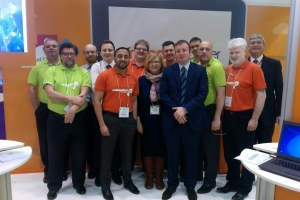 Sean and the Webanywhere team at BETT 2015 Excel London

Webanywhere’s 5th BETT Show in London saw us launch a number of new products and services. Our two main product lines now have OneDrive integration which allows schools to quickly use their Office365 files in both our School Jotter and Moodle platforms. The Moodle functionality has been released to the open source community making it free for anyone to use. The key advantage of storing files on OneDrive is the ability to access your files at anytime and on any device. Office365 makes version control of your documents a breeze and avoids the pain of duplicate files causing confusion. You could start a word document on your mobile phone and then see it in your Moodle LMS with no extra work involved.

During the Moodle with Microsoft Better Together Seminar including Jason Cole, CEO of Remote Learner and Doug Mahugh, Senior Technical Evangelist of Microsoft Open Technologies a walk through of how Moodle can play with Office365, Azure, Active Directory, OneDrive and OneNote was demonstrated. This code has been released to the open source Moodle community and I was particularly impressed by how OneNote assignments could be submitted and then marked. 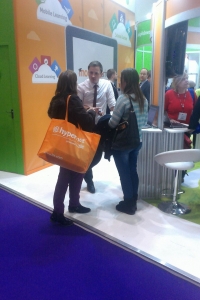 Once the presentation had finished I asked what the plans for the future would be and whether Office Mix (PowerPoint with narration functionality, quizzes and analytics) and Yammer (a social network) would be on the development roadmap. Doug replies this was being investigated and future developments could also include Skype integration. Skype of course would be great for starting an online meeting straight from Moodle.

The lecture theatre was certainly packed for the Moodle with Microsoft talk and the new integrations look like they will improve productivity and easy of use for a great many teachers. After all teachers want to be teaching and coaching not conducting unnecessary administration which can be solved by new technologies! It makes sense to link Moodle the most popular open source learning management system in the world with Microsoft who have a strong reputation for their office productivity software.