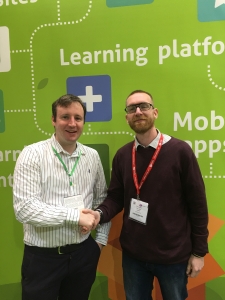 Having just been at the BETT Show in London Excel, one of the most interesting talks was chaired by Tom Starkey, a teacher and columnist for the Times Educational Supplement. He was joined on stage by guest panelists Miles Berry (principle lecturer for computing education at Roehampton University) and Maurice de Hond (founder of the Steve Jobs School).

The discussion was somewhat controversial subjected on “How teachers can do what technology can’t.” Some in the profession (and this isn’t just limited to education!) fear that computers, robots and indeed artificial intelligence (AI) will replace them. The advent of machine learning and the ever-changing and fast-evolving technology landscape means things like driverless cars are just around the corner, and with the internet of things, people may be less needed. Indeed Miles Berry stated that the chances of a school secretary being replaced by a robot were 65%. However the replacement of a primary school teacher was 9% and a secondary school teacher just 1%.

Miles argued that if robots can do the repetitive, low level tasks, then why not let them? This would then free up teachers to do the more important tasks of teaching and learning. After all, if marking can be automated then why not allow for this and free up more time for lesson planning?

Teachers are needed for helping with creativity and curiosity, as well as building pupils’ character. Teachers are needed and don’t need to worry about their employability. What’s more important is the employability of their students in a digital world. It’s the learning process which is key, and the relationship between the teacher and the learner.

Agile methodology works for software developers, so why not teachers? Students need to be curious, challenge authority and be creative. Teachers should be courageous and set an example to their pupils as role models. Miles suggested that agile software development works in business, so why not therefore apply it to the classroom. Why not let teachers and learners have 10% of their time during the week free to teach what they want to teach, or for learners to learn what they want to learn? 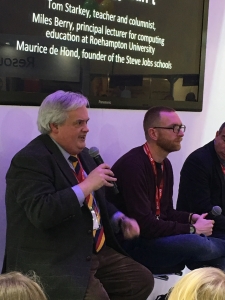 Our future workforce need to work with computers and robots, not against them. Teachers are not going to be replaced by computers any time soon. Computers and the internet are here for enhancing learning outcomes and transforming education. As Sugata Mitra said in his BETT keynote earlier in the week, “freedom and collaboration are key to creativity.” Knowing “stuff” will be obsolete, because “you plus the device” means you know everything – there’s already evidence that the ability to rapidly look information up on search engines is impacting how we store and remember information.  “I know” is irrelevant. It’s how we apply the knowledge to create new businesses, new ideas and the jobs of the future that’s what’s important. Sugata suggested assessments should be shifted to the employer rather than at the end of school. To establish real change, you would need to change the assessment system in schools.

Below is a short video of the BETT 2016 discussion on “How teachers can do what technology can’t.”

Miles Berry and Tom Starkey at Bett 2016 from Webanywhere on Vimeo.