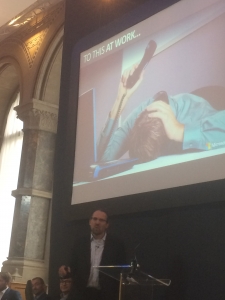 In 10 years’ time there will be large, established companies which do not exist now. Within those companies there will probably be roles and jobs fulfilled, again which are not even advertised in the here and now. If you have watched the latest episode of Panorama on the BBC, Rohan Silva talks about the opportunities and threats of the digital age. Some jobs in the future are more threatened by the digital revolution than others. Thankfully, teachers’ threat of loosing their jobs at the hand of digital innovation is just 2%, whilst other roles such as paralegal and secretarial positions and becoming less and less widespread.

Firstly, Dave Coplin talked about how human beings need to use technology in the future. Business needs to be reimagined because the way we work today does not work. How many computers at home are better than those in the workplace? This leads to productivity problems. The answer to the question asked of hundreds of employees in the workplace was astounding. What constitutes a productive day at work? Lots of people answer “clearing my inbox”, a rigid process that does not change a real issue in businesses. Organisations naturally resist change. What businesses need to focus on is the outcomes, not the processes. We are still working like the Victorians, when a digital society can give you new, different options. Dave Coplin has written a book called “The Rise of the Humans” which is well worth a read.

In the modern workplace, mobile disruption and the problem of “too much information” are becoming real issues. Indeed, in some schools mobile phones have been banned from classes for this very reason.  Dave talks about the problem being the people sending the emails. Data holds the key; data will define our future. The ability to use data in different ways allows businesses to predict the future. Gathering more data gives you fundamentally different answers. An example of this would be asking which of the following cars in the most environmentally friendly: The Toyota Prius or the Land Rover Defender? Most of the audience thought Toyota’s flagship hybrid had fine green credentials, but when you look at the data over the life time the Land Rover wins. You might ask why? The answer is there are lots old Land Rovers still going strong on our roads – they last longer!

Pattern-matching in data will allow us to create awesome new services. Take a resent innovation with Skype, where you can now, in real-time, speak to someone in a foreign language and Skype will translate your words into English, or indeed any other supported language! This changes the game, and will allow future generations to do business in non-English-speaking jurisdictions much more easily.

Our children in the modern workplace will have to embrace a culture of transformation. The rise of the machines will allow us to greatly extend our businesses in ways we have not yet thought possible. The core skills the future workforce will have to demonstrate are those which cannot be replaced by robots. Creativity, critical thinking, collaboration, and empathy are the skills that future business will want to invest in. Our children must work with the machines and not against them, as our traditional middle-class, white-collar jobs become redundant in the new digital age, and new higher value digital jobs are created.