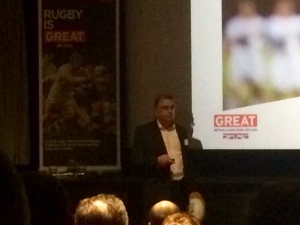 The industrial revolution started in the North of England, and today I attended a UKTI seminar alongside CASE (an association of 17 US States), discussing how Northern companies can trade more effectively with the USA.

After a short introduction from Mark Robson, Regional Director of UKTI, Stuart Watson, Senior Partner for EY, came to the stage. Stuart started off by discussing the Rugby World Cup and how this was having a massive impact, with 500,000 visitors coming to the UK. Four billion people globally are predicted to watch this World Cup. Stuart went on to discuss the question of what is needed to lead a winning team. The values of Rugby Union can be applied to businesses too: respect, enjoyment, discipline and sportsmanship. Clive Woodward, the former England Rugby Union coach, frequently mentioned TCUP: Thinking Clearly Under Pressure. Is your team ready? Ready to take on the best in the world? Does your team practice 1,000 times? You have to play what is in front of you. All shapes and sizes get to play the game of rugby.

Next up at the Trinity Leeds EveryMan Cinema was Sarah Dear, Managing Partner at Elmwood, who joined the brand agency in 1992. Elmwood specialise in branding for retail sector, and they managed to get into the USA via ASDA (who are of course now owned by supermarket giant WalMart). What’s great about Elmwood is that they are independent yet international, with offices in New York, Leeds, London, Melbourne, Singapore and Hong Kong. Their New York office is predicted to be the biggest in the group.

Sarah talked of a herd of buffalos shrinking, with fewer clients overall and the effects of globalisation. You have to mirror your client’s global setup. You then grow your own business on the back of those business relationships. Being international is great for people-development, giving people the option of having new experiences. In the 2008 downturn, the internationalisation of Elmwood de-risked the business. Sarah continued to say that, like Americans, people from Yorkshire are quite direct, which probably helps!

Elmwood set up a slush fund of $200,000 when they set up their New York City office, in order to give the business time to grow. Sarah warned of the differences in employment pay and conditions, with healthcare and maternity costs being funded largely by the business and not the government. Sending people from the the centre of your business to new international offices is a good way of exporting your culture abroad.

All in all, with Elmwood and Sheffield Precision Medical (and our very own Webanywhere), it was great to see similar medium-sized businesses in Yorkshire breaking into America and doing the North proud. Whilst Elmwood were in New York, Sheffield Precision Medical are in Chicago – just like Webanywhere. Their CEO Brian Reece explained the importance of getting to know your US counterparts. When asked by a member of the audience how a Sheffield company could compete with American manufacturing on price, he left us with this thought: It doesn’t matter what you are doing it can always be improved. It would seem that Sheffield still has a long, respected history and global recognition when it comes to the steel industry.