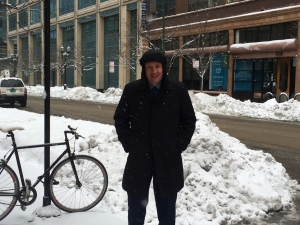 Sean in Chicago following one of the worst snowfall in years

Having just returned from Chicago I can draw comparisons with Webanywhere’s journey in America to my very own personal journey which started early last Sunday morning.

I left the house in darkness early on Sunday morning, the first day of a new month. Thankfully the snow was melting in the UK as I made my way across the Pennines. At Manchester Airport I met up with a colleague and we journeyed together across the Atlantic. Our flight was indirect so a short layover would be needed before our onward journey to Chicago. I thought this would be good as we could stretch our legs and perhaps grab something to eat.

Little did we know what was about to hit us! Winter Storm Linus arrived on the Sunday creating misery for hundreds of thousands of passengers and the cancellation of thousands of flights. Apparently naming snowstorms is a new thing in the US, and Linus was unforgiving.

With our flight cancelled we booked ourselves in the Doubletree by Hilton near the airport. The only bonus was the ability to watch the Super Bowl, and I must say the Americans certainly know how to put on a show. The game ended in controversy with Boston’s New England Patriots narrowly beating the Seattle Seahawks due to some mishandling of the ball. Our journey onwards to Chicago was about to get more controversial as we started to worry about the handling of our luggage.

Having had our original flights rescheduled we decided to switch airline from American to JetBlue. The high passenger demand meant we needed to fly via Boston to Chicago, adding to further delays, and now the cancellation of some business meetings too. Remaining upbeat, we boarded the plane and took off from a rainy and drizzly Philadelphia.

Just as we entered Boston airspace the pilot came on the tanoy, saying “I’m sorry to announce ladies and gentleman but I’m instructed snow storm Linus is making it unsafe to land. We have been asked to turn around and head to JFK.” 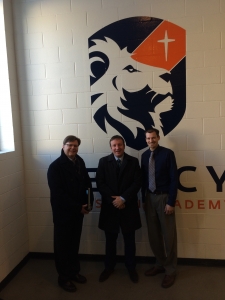 We landed in New York thinking perhaps a short delay would prevail and we could set off again to Boston. This wasn’t to be the case. We then switched to another JetBlue aircraft with our bags still on the other plane. Again waiting on the tarmac, the snow continued to fall and once again the plane was cancelled.

A night in the Big Apple was inevitable so we rang around 10 hotels until luckily managing to find 2 rooms at the Best Western near the airport. The plastic plates for breakfast were not the best but on the upside we managed to get a direct flight to Chicago the following evening. Luckily we were reunited with our bags at JFK and arrived in Chicago under 19 inches of snow – the fifth largest recording of snowfall in it’s history. The greatest irony of all was that my brother had set off to San Francisco 2 days earlier had now beaten us to Chicago!

“Failing big” in America is embraced, whilst in the UK this is not widely accepted. Indeed, Webanywhere started it’s USA journey back in 2010, experiencing a similar stop-start scenario. Our USA expansion certainly hasn’t been a crash landing but nor has it been an easy passageway. As they say in business, it’s not the destination but the journey that matters. 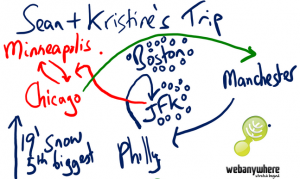 Equally, in online learning it’s easy to measure the outcomes of learning via the grade book, but what is more interesting is the journey and the learner journey. Measuring the progress and learning pathways of students online with big data is exciting. Mapping this big data to their final destinations will create a new industry for the acquisition of talent, and that’s a journey I find fascinating. Webanywhere might build great systems and radar for these student learner journeys, but organisations will always need great pilots – and that’s you, the educators.

Webanywhere is now taking off and is hitting new altitudes, spreading its wings across many States and corporations in America. We will continue to learn from our onward journeys as we meet new people and prepare for obstacles along the way.